Acres Burned by Year 1900 to Present

This is a graphic compiled by a friend of mine using FS data on acreage burned.

We hear all the time how there are far more acres of wildfire occurring than in the past. As I have often pointed out this is an inaccurate statement. Most of the people arguing this are pro-logging and are hoping to justify reducing wildfire by logging. They argue there was a "100 years of fire suppression" which has allowed "fuels" to build and the way to reduce fires is to remove the fuels. All of this ignores the role of climate/weather in fire ignition and spread. Keep in mind the 1910 burn that raced across 3.5 million acres of Idaho and Montana occurred in the early part of the century in the days when some suggest we have successful "fire suppression."

Two points if there was a hundred years of fire suppression, those "suppressing" fires sure didn't do a good job of controlling fires. Of course, if you think about it, it's almost laughable to argue that in the early1900s that men with just mules and axes riding around in the mostly trailless wilderness, humans had any significant influence on large wildfires and the graph shows it.

The second misleading idea is due to time scale. Yes there are more acres burning 2017 than in 1970 for instance. However, that is not the appropriate scale. In terms of ecological processes where there are rotations of hundreds of years, you can't just compare a few decades back with the present. You need a longer time scale and larger temporal scale.

What they do, and even a lot of people in the FS like Paul Hessburg (Era of Mega fire star) etc. do is misrepresent the story by comparing the last few decades with the middle of the last century when it was cooler and moister. Some thought at the time 1970s or so that we were heading for another Ice Age. Because of the climate, there was less fire. But if you take a longer perspective on wildfire, you find that there were far more acres of land being burned in the early part of the century when it was also warmer and drier than in the middle of the century. Due to climate heating, we are now having warmer drier weather which favors wildfire ignition and spread. Now keep in mind that our data collection at the early part of the last century was not as accurate as today, nevertheless, the magnitude of the burning was so much greater than today, it behooves us to consider that we have a fire deficit. And of course, I would argue that under the global heating climate we are experiencing we can not stop the process with prescribed burning or thinning forests. Extreme fire weather overwhelms such modest efforts. 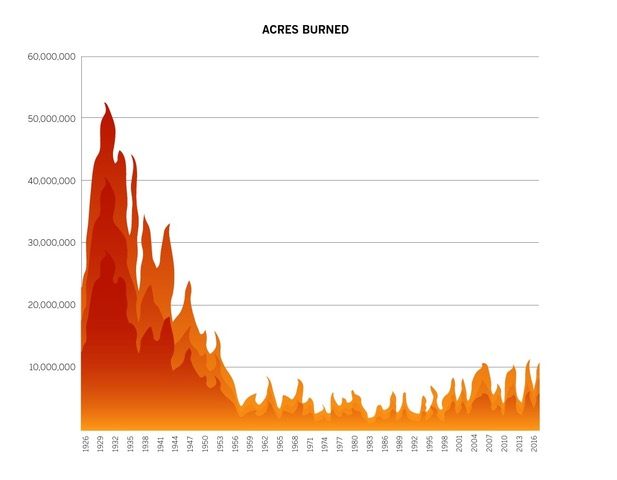